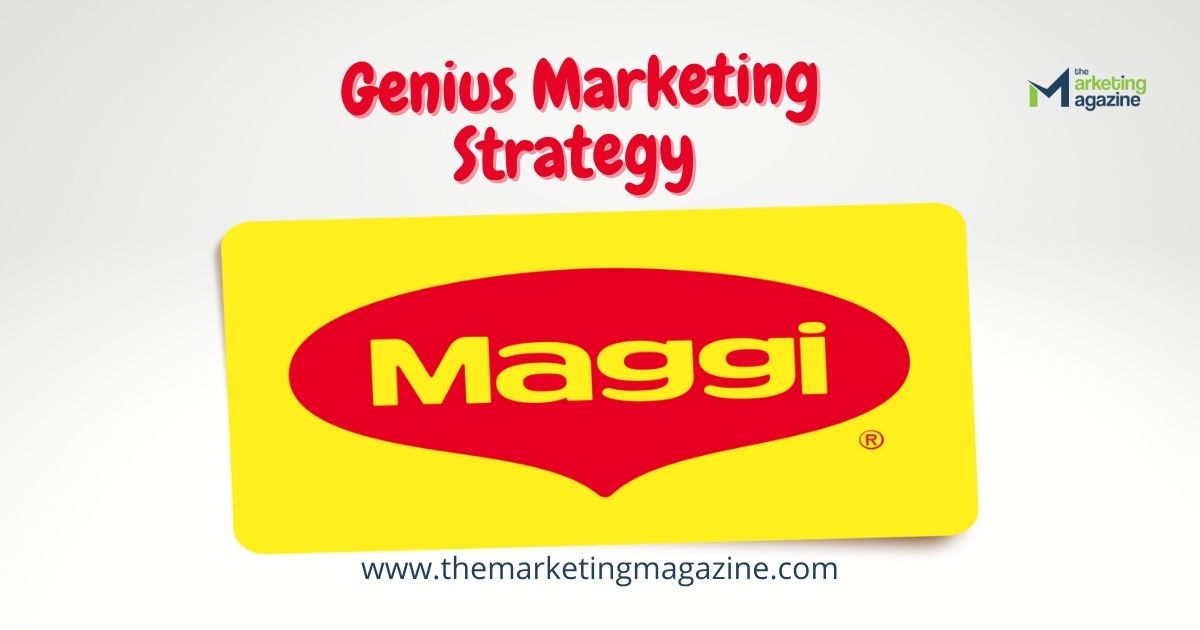 MAGGI- a product of NESTLE company, is a very recognized product made by them which dates back to the year 1983. It is a well-known brand for its two-minute instant noodles which floods the Indian market for over 30 years. The marketing strategy of Maggi made it a best-seller that took so much of twists and turns but continues to be the king of all instant products so far.

One of the favorite noodles of the Indian market takes only two minutes to be prepared and proves to be healthy and wholesome. Whenever there is a shortage of time, Maggi is the go-to meal for most individuals. It also takes care of all your cravings. By all these statements you must be quite sure that it has already caught old its position in Indian markets.

Your mind must be pondering upon how this brand reached milestones, what was the secret behind this?

If you are thinking this, you are definitely on the correct platform. Here we will learn about the marketing strategy of Maggi, the tactics that they applied,  various campaigns, and the ads that led to its enormous success.

Before proceeding further first we will know a little about its history.

Maggi is a product that is made by Nestle India,  which is one of the best-selling products in the country. There are very major products like Maggi masala-e-magic, ketchup, and sauces. All these different products are manufactured in seven technologically advanced factories of the country named Himachal Pradesh, Uttrakhand, Goa, Karnataka, Tamil Nadu, and also Punjab.

Maggi is an important part of more than 70% of the Indian household and it is an ideal carrier of iron fulfillment and contributes to the filling of iron deficiency. Keeping these things in mind, Indian households prefer it more instead of any other fast food product.

Let’s start with the marketing tricks of Maggi to get a better understanding.

Maggi has a clever price marketing strategy that has won hearts all over the globe. It also has very competitors but it has always been the topmost selling product of them all. Talking about its pricing policy it is very direct and clear-cut. The reason is that the consumers are mostly the average middle-class section. They have kept the prices minimal but always end up making a healthy profit.

Therefore the prices are kept pocket-friendly without any changes. In order to keep up with the economic changes prevailing all over the globe, Maggi has reduced the quantity but not the prices. Also, the plus point is that they offer a variety of sizes for a packet of Maggi so that every section of society can access it.

Maggi is the best-selling product that comes under Nestle. It has a variety of products for various countries according to their taste. Its product is mainly instant noodles, instant soups, sauce, and seasonings.

These varieties of instant noodles are the central part of their marketing strategy.

It is consumed in a lot of quantity but in smaller quantities. Due to its popularity and affordability, it has reached the top position.

Maggi has used commercials and advertisements as the main source of their promotion strategy. It created awareness that mainly focuses on working women and children. As the working women have less time to prepare food, Maggi proved to be very effective in this regard because they wanted something to be healthy and tasty for their children. The advertisement we’re showed mostly on kids channels so that it creates an impact on their minds.

After the various allegations put on Maggi, it came up with various taglines such as “WE MISS YOU MAGGI” Campaigns to gather the trust back.

Not only this they have also given free gifts and toys so that it attracts children. It also offered various schemes and discounts.

Many popular figures were featured in the commercial of Maggi such as Amitabh Bacchan, Madhuri Dixit, and Priety Zinta.

So this sums up their promotional strategy.

Maggi focuses on its digital and social media presence very seriously. It uses a sharp engagement strategy across all the virtual platforms. It engages actively on social media platforms to gain all the strength and grow the brand. Not only through television, but it is also focussing on Twitter, Facebook, and Instagram. It can be said that social media is a central part of their brand-building process.

Through all the ups and downs Maggi has faced in recent years, it has consistently maintained its position in the market. Its quality and skills to recognize the needs of the consumers have grabbed the 90℅ of the Indian market today in the instant products category.

Through its brilliant marketing strategy, it has won hearts all over the globe.

July 15, 2022July 20, 2022
The activity of advertising healthcare services through various techniques in order to attract more patients to your organization is known as Healthcare Marketing. The worldwide...
July 4, 2022July 4, 2022
Brand identity is one of those concepts that gets bandied around a lot, and sometimes wrongly. Given the critical role it plays in establishing a...
May 19, 2022May 20, 2022
Even in 2022, many individuals still see LinkedIn as only a résumé and job posting platform. However, times have changed. Especially for enterprises in the...
April 10, 2022May 2, 2022